When you are in the middle of the divorce you may feel like things couldn’t get much worse or that no one could possibly understand what you are going through. In reality, divorce has been around in various forms for a great deal of human history. Divorce statements have been found from the Tang Dynasty in China to divorce contracts from ancient Egypt. 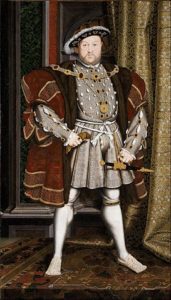 By Workshop of Hans Holbein the Younger 1497/8 (German)

One of the most famous divorces in history, also known as The Great Divorce, involves King Henry VIII of England. The controversy began from the very beginning of his first marriage when he received a Papal Bull from the Pope agreeing that Henry could marry his dead brother’s wife, Catherine of Aragon.

No one is sure when he decided that his marriage to Catherine was over but there were rumors in court of him wanting a divorce as early as 1520. Although, by 1525 when physicians told Henry that Catherine was unable to produce a male heir, Catherine’s marriage to Henry began to sour and Henry began pursuing her lady-in-waiting, Anne Boleyn.

In order to divorce Catherine, Henry had to break with the Catholic Church in Rome. He created a new religion, the Church of England which, not coincidently, permitted divorces. The decision to divorce Catherine put the Reformation into motion, and caused some of the largest consequences in divorce history. With Anne Boleyn already pregnant with his child the couple wed in secret in 1533. Anne became one of the most infamous queens in English history in the three short years she ruled. She was beheaded in 1536 on charges of witchcraft, incest and adultery. Her daughter, Elizabeth, would become England’s greatest queen.

Henry went on to take four more wives in his hopes for a male heir, in direct contradiction of Catholic orthodoxy.

If you have any questions, I can be reached by phone at 214-526-5234 or by email at gbeane@vernerbrumley.com. VernerBrumley’s principal office is located in Dallas, Texas.

Family Law matters are emotional and complex. I can help separate the emotions from the best course of action for my clients. Use the form below to contact me today.